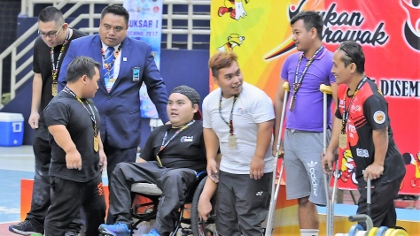 Posted at 16:21h in News by Imelda Anyie 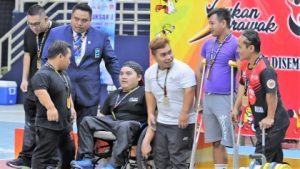 KUCHING – The local Persatuan Sukan Dan Rekreasi Orang Kurang Upaya Negeri Sarawak (Pesron) had lauded the State’s government for integrating the able bodied and physically challenged sports into one event during the recent Sukan Sarawak (SukSar) which was held from December 14 to 17.

This was mentioned by PESRON president, Matthew Chin who said that by doing so, both the able bodied and physically challenged athletes can compete in what is regarded as a truly all-Sarawakian Games that was revived after a lapse of 27 years.

By involving the special athletes in SukSar, the government had also brought about more awareness on their athleticism and competitive spirit.

According to Mathew, SukSar I Kuching had been successful in unearthing many talented young special athletes with the potential to shine at national level competitions.

“Many of the athletes are still young and are aged below 18 and they have shown potential in winning medals at the national paralympiad meet,” he said on the participation of special athletes competing in athletics, swimming, powerlifting and archery even though only athletics and swimming were competed with gold medal at stake.

For the record, Sarawak have won the Malaysian Paralympiad for 12 consecutive times and they are targeting to be overall champions for the 13th time in Perak next year.

“I would like to convey my thanks to the organisers led by their Chief Executive Officer, Dr Ong Kong Swee for working so hard to ensure that all athletes are given the opportunity to compete so that they can go to a higher level.

“This effort gets the strong support from the state government and we would also like to thank the parents who have made a lot of sacrifices and supported para athletes,” she enthused.