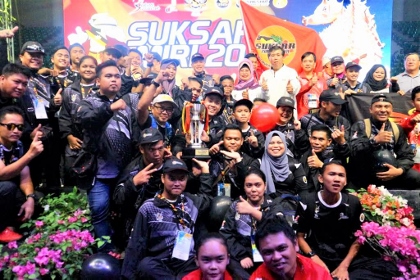 Posted at 14:45h in News by Imelda Anyie KUCHING – The Northern Zone contingent emerged victorious and was crowned as overall champion in Sukan Sarawak (SukSar) 2017 which ended on December 17.

The contingent also created history of its own after having surpassed their initial 31-gold target to defeat the other contenders with a gold medal haul of 78 and their athletes who came from Limbang, Miri, Bintulu bagged a total of 174 medals including 59 silver and 37 bronze.

Northern Zone contingent chef-de-mission,  Muhamad Yakup Kari who is also Resident of Bintulu together with all of his athletes w in a buoyant mood when he congratulated his athletes and coaches.

“If our current sport facilities can be upgraded and improved we believe and are confident that we might be able to grab more medals and more potential athletes could be produced to compete in the second SukSar 2019 in Miri,” said Yakup who is also the Resident of Bintulu.

The weightlifting event had contributed the most gold medals for the Northern Zone with 24 followed by athletics with 18, karate (7), muaythai (6), archery (6), judo (4), athletics (para) 4, swimming (para) 3, swimming (2) and a gold each from handball, petanque, badminton and sepak takraw.

The contingent’s archery athlete, Ting Kee Wei contributed another fine feather to the cap after he received SukSar 2017 Most Promising Male Athlete Award.