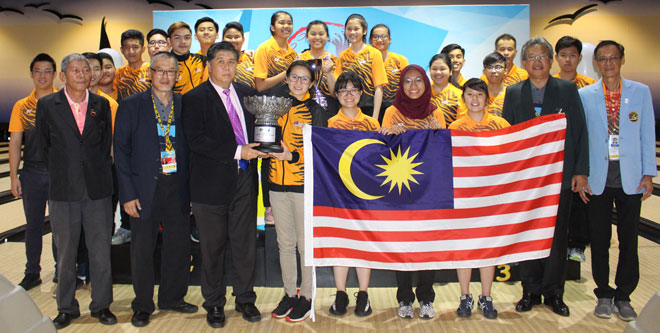 Posted at 18:20h in News by Imelda Anyie 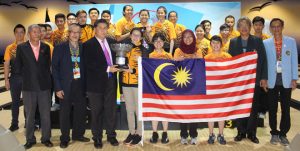 Malaysia’s challenge was spearheaded by Tun Ameerul Hakim who upstaged Alex Yu, the top seed bowler from Hong Kong A during the final round. He was on form and bagged two games with a score of 269-205 and 201-181 to collect the Boys Masters gold.

Earlier, the Malaysian second seed bowler disposed off Shoumick Datta of India, the third seeded bowler with a score of 279-237 during the semi-final.

In the Girls Masters stepladder finals, Puteri Nurul Dini, who was the top seed, faced no difficulty in overcoming the challenge from third seed Fion Liew Shan Ting from Singapore, beating the latter 207-176 and 251-193 to make it a clean sweep for Malaysia A.

Fiona Yew also from Singapore finished third after losing to compatriot Fion Liew 158-176 in the semi-final.

Malaysia A’s other gold medals were won in the Girls Singles, Girls Doubles, Girls Team and Girls All Events.

Puteri Nurul Dini was the team’s best performer with four golds from the Girls Doubles, Girls Team, Girls All Events and Girls Masters and a bronze in the Girls Singles.

“This event gathers top class bowlers to Kuching and fosters goodwill and friendship among countries in Asia. “I congratulate Abas for successfully organised this event for the very first time in Kuching. We appreciate your continued sacrifices and endeavours in promoting the sport in Sarawak,” he said.