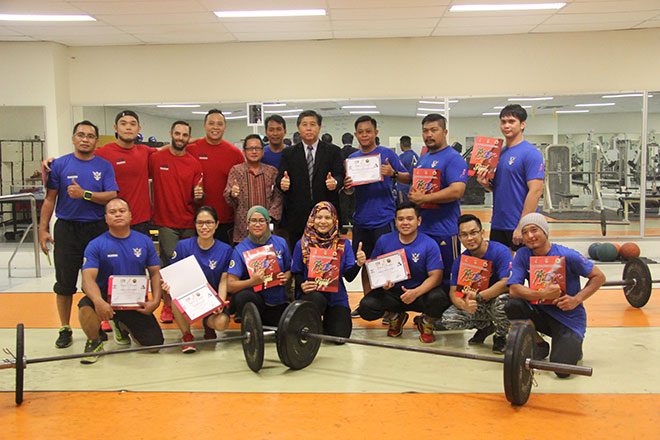 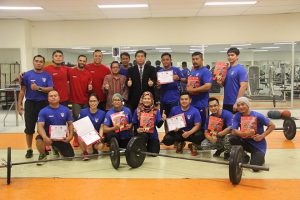 The two-day course was aimed at educating the gym instructors on the dynamic athletic movements which will improve and enhance the performance of athletes at all levels. The course was conducted by certified instructors from CFK Training Centre and was aimed to give the gym instructors an additional edge in the local athletes’ preparations for the coming 19th Malaysia Games (Sukma XIX) to be held in Perak next year.

Among the topics covered the course were Squat Series and Olympic Weightlifting by instructor Carter Wei, Work Outs and Practical Sessions by Clement Lai, and Methology by Maxime Jamelin,

SSC chief executive officer, Dr Ong Kong Swee graced the closing ceremony and presented the certificates of participation to the participants on November 29. He praised the organising of the course which was coordinated by Jubali Suhaili from SSC.

“It is high time for them (gym instructors) to get a new approach in physical conditioning because most of our grass roots level we have to go under an instructor for physical fitness,” Dr Ong enthused.

He felt that the gym instructors had to be upgraded every one or two years and said Level 2 Course is expected to be organised next year.

Ong said strength and conditioning will help the athletes to improve their performance especially those in contact sports. He also disclosed that Sarawak’s preparation for next year’s Sukma in Perak will include the seven state weightlifters who is progressing well in their training and they will be joined by seven others from Miri after the Sijil Pelajaran Malaysia (SPM) examinations.

“Our weightlifters did have a drastic improvement in the recent national championship but we are looking into our target.We need to plan our training for them to reach their peak performance in September next year,” he said.

Meanwhile, strength and conditioning coach is essentially a fitness and physical performance professional who utilises exercise prescription specifically, but not limited, to improve the performance of competitive athletes.

This is achieved through the combination of strength training and aerobic conditioning, alongside a variety of further methods.

The general description and duty of a strength and conditioning coach is to develop an exercise prescription plan that modulates aerobic, resistance, and/or flexibility training to suit the metabolic and physical demands of today’s sports.