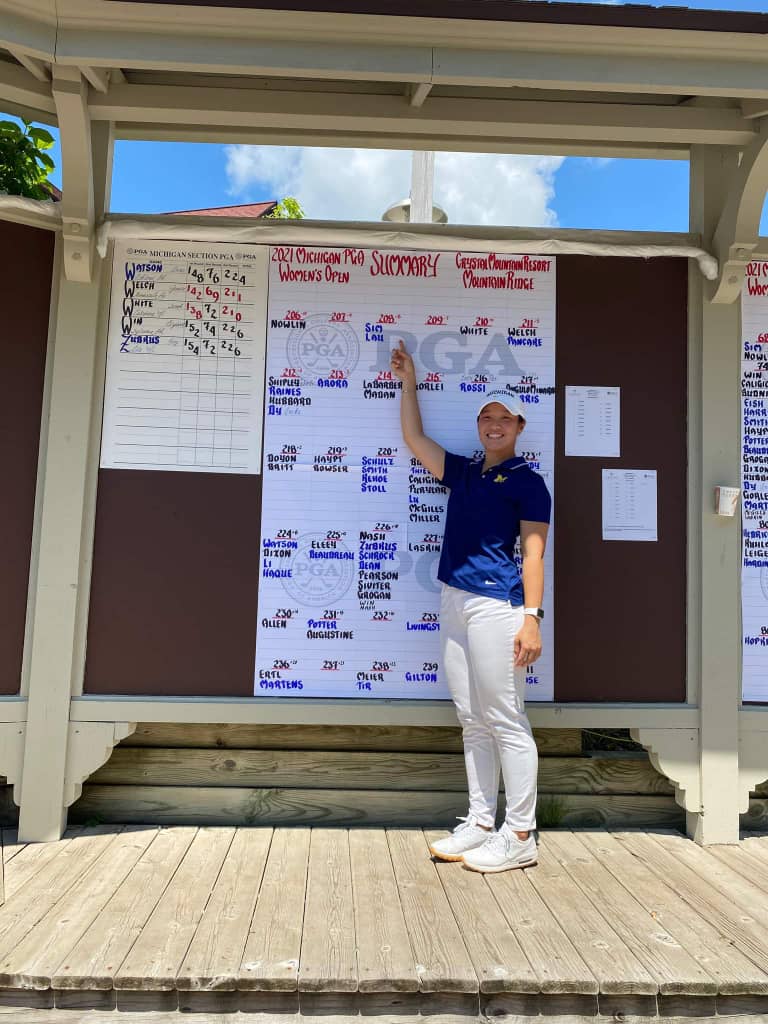 07 Jul Good News from S’wak golf talents in US

The 21-year old national player from Bintulu fired a eight-under 210 for a three-day total to tie with Kelly Sim of Edgewater, New Jersey. Both were just two strokes behind professional rookie Tristyn Nowlin of Kentucky. Ashley, the only Malaysian in the field, and Kelly are joint first as amateurs in the tournament on June 30.

“I feel happy and satisfied with this result considering that most tournaments were cancelled after the Covid-19 pandemic outbreak. I took a break as well for a major part of the second year of university.

“I was not expecting much from this tournament considering it is a professional event, thus I just wanted to focus on my own game and play without any pressure on the golf course.

“Of course, down the stretch when I knew I would have a chance to win the tournament, I felt the pressure a little, but I stuck to my one shot at a time mentality and I am very happy with the results,” she said.

“This event does serve as a good confidence booster heading into the next few tournaments, however, the next two tournaments would mainly be match play and that is a different format than stroke play.

“That being said, I will take this experience and make the most out of it for my future tournaments,” she added.

Meanwhile, other Sarawak Sukma shadow team golfers based in the US are also doing well in professional and college tournaments. Recently, Lim Beng Keat, 21, who is majoring in Psychology at the University of Ottawa-Arizona in Surprise, Arizona, won the Vanguard International after firing a five-under 216 to finish four strokes ahead of Franklin Lin of Arizona Christian University and five strokes ahead of university mate Austin Hardman.

He also won the Quaz Fall Invitational where he carded a seven-under 137 over two days.

Two other Sukma long list players Angel Hii and Zulaikah Nurziana Naseer are also currently pursuing studies in the US.

Sarawak Golf Association president Hoan Kee Hock was among those who congratulated Ashley and hoped that her performance will inspire other golfers to do well in national and international tournaments.

“This is a positive and encouraging result for Ashley especially at this time where the whole world is affected by the Covid-19 pandemic and l hope she can perform consistently in the coming events.

“Furthermore, she is an amateur and it shows that she can compete against professional players and I do hope she can continue to do well and, by Sukma next year, she will be all set for the challenge,” he said.

“I would like to thank the Sarawak government through the Ministry of Youth and Sports and Sarawak Sports Corporation (SSC) for their strong support in helping our golfers with training allowances and funding the registration fees for overseas tournaments.

“SSC has also helped to arrange for vaccination of the golfers who are bound for the US.

“I would also like to remind all golfers that even though they have been vaccinated, they need to stay safe and strictly observe Standard Operating Procedures,” Hoan added.

SSC chief executive officer Dr Ong Kong Swee, who also congratulated Ashley, revealed that they have been monitoring her progress since Sukma Perak two years ago.

“We are supporting the golfers by funding their registration fees for the overseas based Sukma athletes and assisting them in whatever ways we can. For example, if they want to return to play for Sarawak in Sukma Johor, we can help refund their travelling expenses, he said.