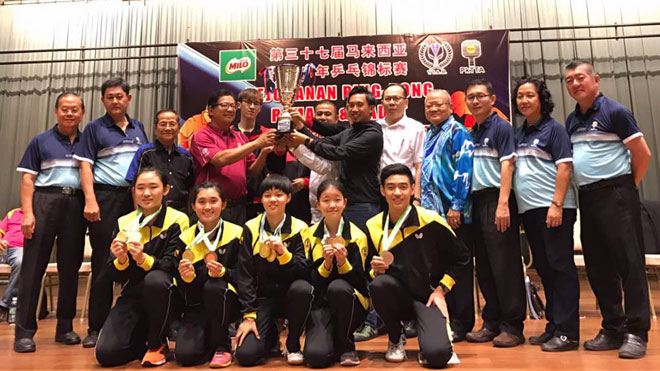 Posted at 12:43h in News by Imelda Anyie 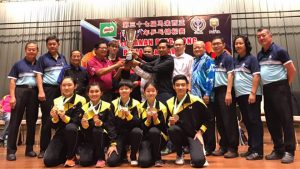 KUCHING – Sarawak junior paddlers defended their title at the annual Malaysia Milo Junior & Cadet Table Tennis Championships which was held in Kampar, Perak from October 18 – 21 brought home six gold, four silver and bronze medals in the four-day meet to emerge as three-time consecutive overall champions (2015-2017) in the 37-year history of the tournament.

A total of eight Sarawakians also emerged from the tournament ranked among the top 10 in the various categories which include Alice Chang who the top paddler in the Junior Girls’ category followed by Catherine Chan in third and Foo Wui Jia in fourth place.

Karen and Sammi Tay made it a 1-2 for Sarawak in the Cadet Girls’ overall ranking while Christopher Goh topped the Cadets Boys’ rank list together with Too Ying Chuen at number nine. Gabriel Ling was the number three among the Junior Boys.

“This is the best achievement by the Sarawak team in the state’s table tennis history and our actual target was four gold medals,” said team manager Ling Kiing Tsan while highlighting the presence of national paddler Alice Chang and two national youth back-up players Karen and Christopher Goh as key to their success.

“The team was very united, team work was superb with members supporting each other during the matches and team spirit was high too,” he noted.

Ling was especially pleased with Alice Chang, Gabriel Ling, Christopher Goh, Karen and Sammi Tay who made the individual finals and contributed strongly to the victories in team events.

“Table Tennis Association of Sarawak (TTAS) would like to say a very big ‘Thank You’ to our Minister of Tourism, Arts, Culture, Youth and Sports Sarawak, Datuk Abdul Karim Rahman Hamzah, Sarawak Sports Corporation CEO, Dr Ong Kong Swee for helping us to engage good coaches as well as helping to subsidise our expenses and MSNS coordinator of table tennis Awang Addin Awang Sufian for following the team to Perak,” he told The Borneo Post.