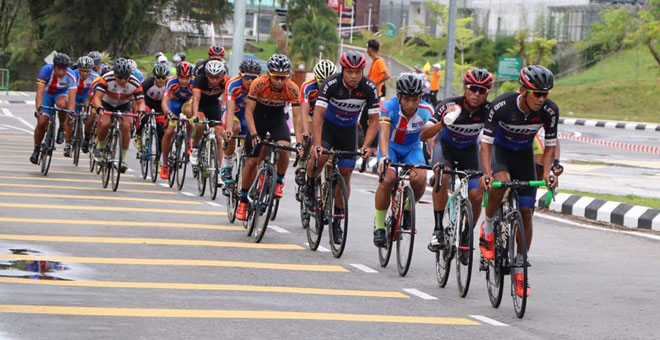 One of the highlights of the recent DBKU Criterium Race 1.0 held at Sarawak Sports Complexs in Petra Jaya on 17.09.2017

KUCHING – Rain failed to dampen the spirit of the 90 cyclists who competed in the Dewan Bandaraya Kuching Utara (DBKU) Criterium Race 1.0 2017 which was held at Sarawak Sports Complex in Petra Jaya on 17 September 2017. Although it started to rain shortly before the race starts at 7 am, the event was delayed only for a short period of time because the organisers decided to proceed with the race.

The team from Police (PDRM) emerged victorious  in the open category which was keenly contested after Mohd Affy Qhairant Arron completed the 20-lap race in a time of 1 hour 15 minute 24 seconds followed by Amirul Anuar Jafari and Muhamad Fauzan Ahmad Lutfi.

In the All Stars category, Zainal Ariffin Mohd took first placing with a time of 16 minute 36 second to finish ahead of Marija Singh and Kamaruz Zaman. The boys junior race was won by Geri Maulana Sapura who defeated Bernard Van into second place with a time of 1 hour 5 minute 44 seconds while Sanim Fitri Abdul Halim finished third.