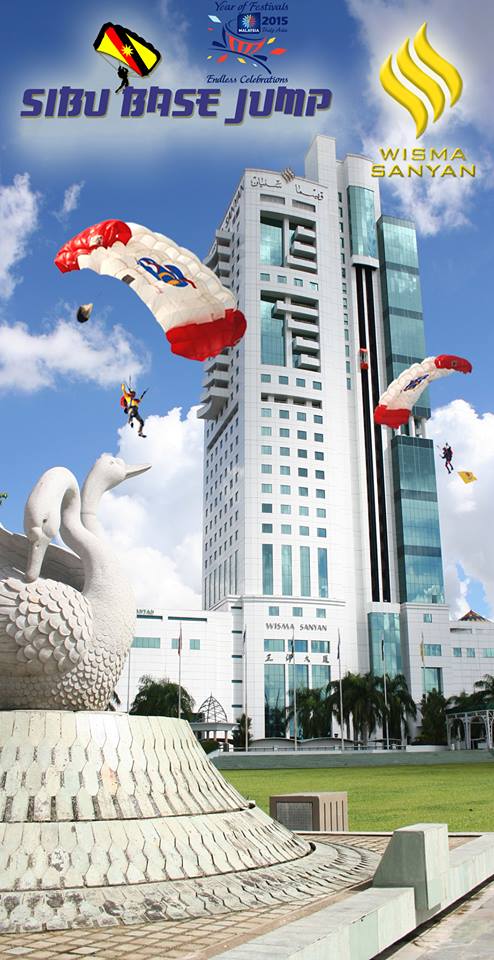 Posted at 04:15h in extreme sports, News, Sport by konxdev

SIBU: The Ministry of Tourism, Arts, Culture, Youth and Sports Sarawak (MTACYS) will render full support to the plan of making Sibu a popular destination for extreme sports such as BASE Jump which had attracted a lot of attention from foreign tourists and sports enthusiasts.

According to MTACYS Minister, YB Datuk Abdul Karim Rahman Hamzah said there must be collective efforts in promoting sports tourism in Sarawak and promoting extreme sports such as BASE Jumps can boost Sibu’s name to a higher level .

He recently gave the assurance that MTACYS is always supportive of promoting Sarawak as a popular destination including for extreme sports like BASE Jump  in Sibu. “Any form of sports comes within the purview of my ministry. I am glad to see that extreme sports like Sibu Base Jump seemed to be gaining a big interest,” YB Datuk Abdul Karim enthused.

“If Sibu has any plan to bring the Sibu Base Jump to higher level, definitely my ministry is supportive, especially if it could generate tourism and promotion of Sibu,” he added. Meanwhile, Sibu’s Resident Mr Hii Chang Kee said Sibu’s BASE Jump was already on Sarawak Tourism Board’s (STB) calendar of events.

Over 80 BASE jumpers are participating in the 9th Sibu International BASE Jump which is on from 22th to 24th September at the 126 metre high Wisma Sanyan Building and descending at the open field of Sibu Town Square Phase 1. The event is organised by Sibu Division Tourism Task Group (DTTG) and among the participants are 8 female jumpers in which four are Malaysians.

This year’s event is held in conjunction with Visit Sibu Year (VSY) 2017 campaign. The acronym ‘BASE’ stands for 4 categories of fixed objects from which a person can jump off from namely ‘Buildings’, ‘Antennae’ (such as telco towers), ‘Spans’ (such as bridges) and ‘Earth’ (such as cliffs).

This year’s foreign participants are from Australia, Belgium, Brazil, Canada, Finland, France, Germany, Ireland, Italy, the Netherlands, New Zealand, Portugal, Russia, the United Kingdom and the United States. In conjunction with their visit to Sibu, the participants would also be brought to Rumah Michael Jalak in Bawan, Kanowit on Sept 24 for a retreat.