Posted at 07:26h in News by Imelda Anyie 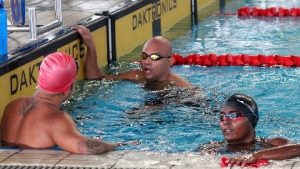 KUCHING – Over 300 swimmers including those from overseas are competing in the Speedo Malaysia International Masters Swimming Championship 2017 which is being held at Pandelela Rinong Aquatics Centre in Petra Jaya on December 9.

The participants for this year’s event came from Singapore, Indonesia, Sri Lanka, Australia and Malaysia. They aged between 24 to 70 years and above. Many of them had also joined last year’s competition held at Darul Ehsan Aquatics Centre in Selangor on 10 December 2016 including defending champion, Team New Wave.

The event is divided into team and individual categories with the rules and regulations will follow the International Swimming Federation (FINA). Both the male and female participants will divided into 11 age-groups but they are allowed to form a team for the relay events.

The winning team shall be determined by the highest total number of points collected by their respective swimmers in individual and relay events. Last year’s championship title went to New Wave Swimming Club which collected a total of 1,499 points followed by Buaya Swim Team with 959 points while Indo Master Swimmers finished third with 362.5 points.